Some Mac users feel macOS Big Sur is slower, lagging, or has worse performance on their Macs compared to prior versions of macOS system software. If you have noticed a performance degradation since updating to or installing macOS Big Sur, there may be good reason for that slowness, or it may be due to a variety of other factors. Don’t fret, as there very well could be a simple solution.

We’ll walk through some possible reasons as to why macOS Big Sur feels slow on a Mac, as well as covering some advice and general tips and tricks to speed things back up again.

Why is the Mac with Big Sur running slow? And what can you do about it? Let’s review a few of the possibilities and options to fix potential performance issues.

If you just recently updated to macOS Big Sur and you feel the Mac is slower than usual, the best course of action is to keep the Mac awake, plugged in (if it’s a laptop), and let it sit for a while (perhaps overnight or for a nights) – basically, hurry up and wait. I know that sounds like weird advice, but here’s the logic behind it: after a major macOS system software update, the Mac performs various maintenance routines behind the scenes, it reindexes the drive for Spotlight and Siri, and apps like Photos may reindex too.

So basically, let the Mac sit turned on overnight, perhaps for a few nights in a row, and allow those indexing and optimization processes to complete. When they’re finished, the performance of the Mac should be significantly better, if not entirely back to normal.

This is often the the number one reasons Mac users think a new operating system is slower than a prior version, so don’t disregard this simple advice!

2: Check CPU Use in Activity Monitor for Apps, Processes, etc

If a Mac feels slow or sluggish, one way to possibly find the culprit is to check Activity Monitor for processes that are using the slow down. This is somewhat advanced to take action on, but it’s simple enough to observe that it can be helpful.

Once Activity Monitor is open, choose the CPU tab to sort processes by CPU percentage usage – this is basically showing you what processes or applications on the Mac are consuming processor, as a percentage of available CPU resources. If you see something using significant CPU, that is likely the cause of your slowdowns. 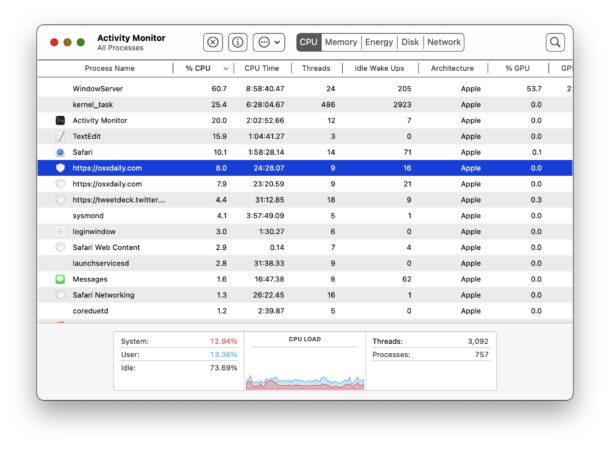 For example, if you see a system process like ‘mds’ or ‘mds_stores’ using heavy CPU, that’s likely because Spotlight is reindexing the drive, and the earlier advice of waiting should resolve that problem.

Another example of a native process using CPU usage is ‘WindowServer’, and if you see that using a lot of CPU (as the screenshot here shows at 68%) then you may have too many open windows, or applications open on the Mac, and/or things like window transparency and visual effects may be slowing the display of open applications and windows, as each fancy visual effect requires system resources to render and look fancy. We’ll cover more on the visual effect aspect of system slowdowns shortly, but the first thing you could try is closing windows or applications.

Of course many apps use heavy CPU to accomplish tasks, and that will slow down the Mac to do so. For example, if you’re exporting a movie project from iMovie and it’s using heavy CPU, and the Mac feels very slow, that’s normal and to be expected, so let iMovie finish the task at hand.

Often you may see third party apps using heavy CPU too, and those could be manually quit, or inspected directly by going to that open app and seeing what it’s doing. Sometimes updating those apps can resolve the issue, or quitting them.

If you’re comfortable doing so, you can use the Mac force quit app functionality, or even completely remove or uninstall the apps that are not behaving as expected. Just be sure to not force quit random tasks you’re uncertain of, as you may cause an issue with the Mac, or find yourself losing data before it is saved, or logging yourself out, or causing other problems that would require a reboot.

If you use the Messages app on the Mac to talk to people, and if you send and receive many videos, stickers, animated GIFs, and other things of that nature, you may notice the Mac slows down when those active message conversations are open on the Mac.

You may notice that animated GIFs can be particularly sluggish, as they’re playing repeatedly on screen.

Using the aforementioned Activity Monitor trick you may notice this directly; if you have a message thread with a lot of animated GIFs going on, and you open Activity Monitor, don’t be surprised to see “Messages” using some CPU.

Visual effects can make the Mac look quite fancy, but they can also cause some system slow downs, particularly if you have a lot of windows and apps open, or if the Mac is older or has fewer system resources in general. Accordingly, one way to speed up macOS Big Sur (and most other modern Mac OS releases too for that matter) is to simply disable Window Transparency and use the Reduce Motion feature.

You will see an immediate change in the visual appearance of things as the transparency is disabled, and windows, sidebars, titlebars, menubar, and other interface aspects will no longer have a translucent effect. You’ll also notice far fewer animations of zips and zooms, and instead with Reduce Motion enabled you’ll find there’s a fading animation used instead. The net effect is less system resource usage as there are fewer resources needed to draw the interface eye candy, and often a faster Mac too.

The ability to reduced transparency on Mac and Reduce Motion has been around a while, and these tips can help speed up other older system software versions too.

5: Clean Up a Cluttered Desktop

If your Mac desktop is filled and brimming with files and folders, this can result in general sluggishness of the Mac.
The reason is fairly simple; each file or folder on the Mac desktop takes system resources to draw a thumbnail and keep it rendered on screen, and so having fewer of these items on the screen uses less system resources.

Consider dumping everything from the desktop into a folder so the contents are not always on screen, or you can hide all desktop icons on the Mac using a Terminal command if you don’t want to use the desktop in general.

This trick is not limited to macOS Big Sur, this applies to all macOS versions too.

Updating Mac apps can also help improve performance, so don’t forget to update them either.

You can find updates to many Mac apps from the Mac App Store Updates section.

Apps not downloaded or installed through the Mac App Store often update independently, or through the app themselves, or via the app developers website. For example, Google Chrome will update automatically on its own.

Be sure to keep Mac apps up to date for optimal performance.