This is about upgrading MacBook Airs (2013-2017) & MacBook Pros (2013-2015) with new high speed and/or high capacity NVMe SSDs.
Obviously if you are not confident purchasing or doing the upgrade yourself we at Lasermoon Consultants (Mac Apple Repairs) can do it for you.

0 - Why upgrading to NVMe ?
Background information
Between 2013-2017, Apple shipped laptops equipped with proprietary, AHCI "blade" SSDs with a proprietary "gumstick connector" (12+16 pins).
They had either 2x PCIe 2.0 Lanes (2013) or 4x PCIe lanes, and were made by Toshiba or Samsung (SSUAX or SSUBX)

For many years the only possible replacements or upgrades for those SSD were to :
PCIe M.2 AHCI SSD are no longer made : you can't buy new ones, and used ones are expensive with low capacity and no warranty.

At the same time, NVMe "blades" M.2 SSD are going more on more mainstream on the PC market, and there are literally dozens of brand new, cheap, super fast and reliable NVMe SSD on the market, with enormous capacities up to 4TB.

So why not go NVMe ?

To gain full NVMe support you need two things :
Thankfully, in 2017, macOS 10.13 (High Sierra) came out and it was discovered that it not only supported any tiers NVMe SSD but it also brought BootRom upgrades which enabled booting with NVMe SSD...
Yay!

So, now we can upgrade many 2013-2017 MacBook laptops with brand new, cheap NVMe SSDs carrying 3 to 5-years warranty, instead of expensive, used, out of warranty, AHCI SSDs.

This guide is all about installing those new NVMe SSD replacements.
NVMe drives are the future compared to AHCI PCIe drives which are no longer made.

As of 2020 NVMe drives gives you unbeatable capacities, speed, and low prices.
And also, upgrading an old computer with a NVMe drive is always better for you and the planet than buying a new one... and it is a lot cheaper.

1 - Which Mac laptops can be upgraded with a NVMe SSD ? In details :

Macbook Air 2012 (tried on 11 inch model) has a mixed connector which can use both SATA (stock one) and PCIe x2 (NVMe) drives, thus it is possible to gain 800+ MB/s (WD SN550) with an NVMe SSD and the right adapter for it. Hibernation has no issues so far on macOS 10.15.7, the external icon is easely fixed with Innie.kext.

You can upgrade the storage of those models with any SATA M.2 AHCI SSDs - e.g Crucial MX500 sata M.2 - and M.2 to Apple 6+12 adapters. Transcend and OWC also sell upgrades.

LATE MODEL LAPTOPS AFTER 2015
If you have one of those late models, sorry their storage cannot be upgraded. Their storage is BGA NAND Flash soldered onto the logic board. You can as a customer give feedback to Apple regarding this situation.

An exception is the MacBook Pro 13" Retina without TouchBar aka 2 ThunderBolt ports (2016-2017) which has proprietary PCIe 3.0 NVMe SSDs. It might become possible at a future date to upgrade it with with adapters and small 2230/2242 M.2 blades like Sabrent/Toshiba/Koxia/Sandisk/WD (Sintech adapter is out).

3 - Which NVMe SSDs are known to work?
Basically all NVMe SSD work, except a few ones with incompatible firmwares.
The following models have been tested to work :
NVMe SSD known not to work on MacBook Pro / Air. DO NOT BUY:
Compatibility issues with these models are due to a firmware issue.

Update Aug 2021: SK Hynix P31 Gold is now known to work.
The old firmware did not allow you to boot into macOS, it would just kernel panic. The new firmware released by SK Hynix fixed the incompatibility. You should seriously consider using this drive if battery life is a priority. It is known to be one of the best possible drives for laptops.

Note: SK Hynix Gold P31 is widely available in 512GB and 1TB versions. A 2 TB version has just come out (September 2021) but stocks are still limited.

Those AHCI options work, but are expensive / come with no warranty / are over-priced / have flaws :
NVMe upgrades which have the native Apple 12+16 "gumstick connector" :
A last thing :
(see table below for 4K compatiblity)


4 - The M.2 to Apple "gumstick" adapters - the good and the fake
Apple uses a proprietary "gumstick" 12+16 PCIe interface in its 2013-2017 MacBook Airs and Pro computers. The rest of the PC industry uses the "M.2" NGFF connector which is very common.

So, if you want to upgrade your Mac with a regular M.2 NVMe drive, you need an adapter.
Lot of adapters have been tested in this thread, but in one sentence :
always buy an Apple to M.2 adapter from Sintech

The "Chenyang" or "CableCC" adapters (and assimilates) are still sold today but they do not have the proper wiring letting NVMe SSD work well.. Using it will cause reboot issues, sleep issues.
DO NOT BUY THEM

Instead, buy the "Sintech" adapter. Previously, Sintech made 3 models (rev. A rev. B and rev. C).
There were problems with the rev. A adapters too, this was commented a lot in this thread.
But now, as of early 2019, I can confirm that every adapter shipped from Sintech have the proper wirings and works perfectly.

A cheaper solution is a no-name but mostly identical adapter from Aliexpress available here - https://aliexpress.ru/item/33027201181.html. This exact one bought in early 2020 is proven to work on 2015 A1398, connection is full speed v3.0 4 lanes. 3$ only.
Beware seller may change the product without notice! We are not responsible for that.

Also, if you have an old Sintech adapter made in 2017-2018, you have to check that there is some tape insulation like in the following photo : 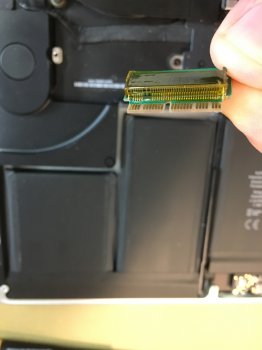 5 - Are you getting a battery swap / keyboard swap / major internal repair at an Apple Store or direct from Apple? You may want to put the old Apple stock SSD back in the laptop before you give it to Apple to repair.
Some users have reported that Apple Stores have refused to do a battery swap on MacBooks with an upgraded NVMe SSD. One user said their MPB (sent in for a battery swap) was 'returned to me with unspecified “damage” due to the ssd' and 'a picture of it with the adapter' was included in the message from Apple. This was despite the Apple Genius being informed in advance and saying it would be fine.

It looks like some Apple technicians may be fine with it and others may not want to work inside a MacBook with a NVMe adaptor installed.

Third party Apple repair services should be happy to proceed with any work even with a NVMe SSD installed.


6 - Hibernation issues on 2013-2014 laptops
Starting with macOS Big Sur 11.0.1, Apple has released Root ROM or system firmware for 2013-2014 MacBook Pro and MacBook Air models that allows these models to be upgraded with NVMe drives and prevent deep sleep issues without further system modifications.

Updating to those 4xx.0.0.0 versions of Boot ROM or system firmware will make any additional modifications to prevent unexpected system restarts unnecessary; however, it has been noted that the hibernation and autopoweroff behavior of those MacBooks models has been changed and that the battery discharge is higher than with the original PCIe SSD.

To prevend this problem you had two options:
Disabling hibernation had the drawback that your MacBook would consume more power when sleeping for a longer time compared to proper hibernation (suspend to disk) with the default settings. Your battery would lose ~10% overnight.

The process of patching the Boot ROM or system allowed hibernation to work but required additional hardware. See
https://forums.macrumors.com/thread...ssd-to-m-2-nvme.2034976/page-65#post-26224320 for a guide that walked through the required steps.

Other options included a ”Matt Card” from CMI zapper.

7 - Troubleshooting steps for kernel panics, crashes or instability
A small number of members have reported issues around stability and kernel panics after upgrading to an aftermarket SSD. These issues are quite rare, so don't panic! We have a 10 step plan.

If you are experiencing crashes or kernel panics especially around sleep/wake, try the following steps:
When posting for help or if you have a sucess story to share, use the following format (mostly info from "About This Mac"/"System Report"):

During installation of Windows 10 via BootCamp, a blue screen may occur.
This was resolved by user ohnggni in post #1685, thanks to him.

Here are the two recommendations to Install BootComp with success on a MacBook Air / Pro with a NVMe SSD :
1. Press Shift + F10 keys.2. Launch "regedit".3. Find this directory, "HKEY_LOCAL_MACHINE\SYSTEM\Setup\Status\ChildCompletion"4. Once you can see "setup.exe" in the right section, double-click it and modify the value to 3.5. Close the regedit.6. Reboot-----How to fix various other issues that may occur with Boot Camp Assistant:Tips from https://appleinsider.com/articles/1...ling-windows-through-boot-camp-in-high-sierra- Disable File Vault (will take a few hours / overnight to fully decrypt your drive)- Turn off Time Machine and un-associate any Time Machine drives- Purge local Time Machine snapshots:Terminal> "tmutil thinlocalsnapshots / 9999999999999999"

If you get "An error occurred while partitioning the disk" in Mojave Boot Camp Assistant, this is a problem with disk overallocation. To fix:
(Technically, /dev/disk0s2 may not be the correct disk, but OSX will run fsck_apfs on all internal drives anyway.)

If there was a problem with overallocation, you may see this line in the output: "Overallocation detected on Main device" And then another line may appear: "Fix overallocation"

9 - Comparison of tested NVME SSD models
Here you can find some excel charts which try to give you comparison of tested models - Speed - Power consumption - NAND types (MLC, TLC, QLC).
As a comparison, Apple original AHCI models and Transcend models were also included in the chards.
The recommended models are will depends on your need, but the SX8200 Pro and Sabrent Rocket clearly tops nearly all the charts... 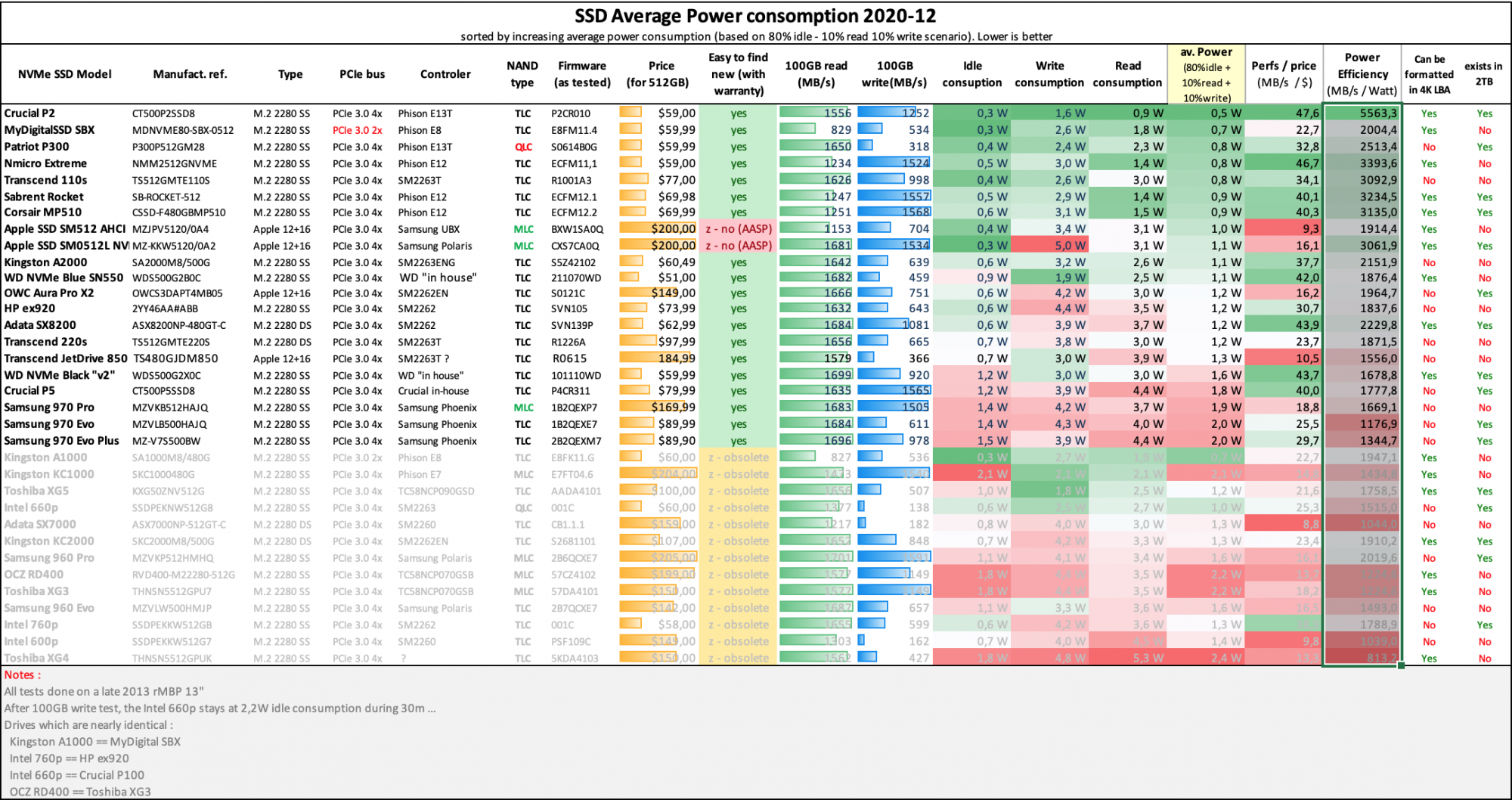 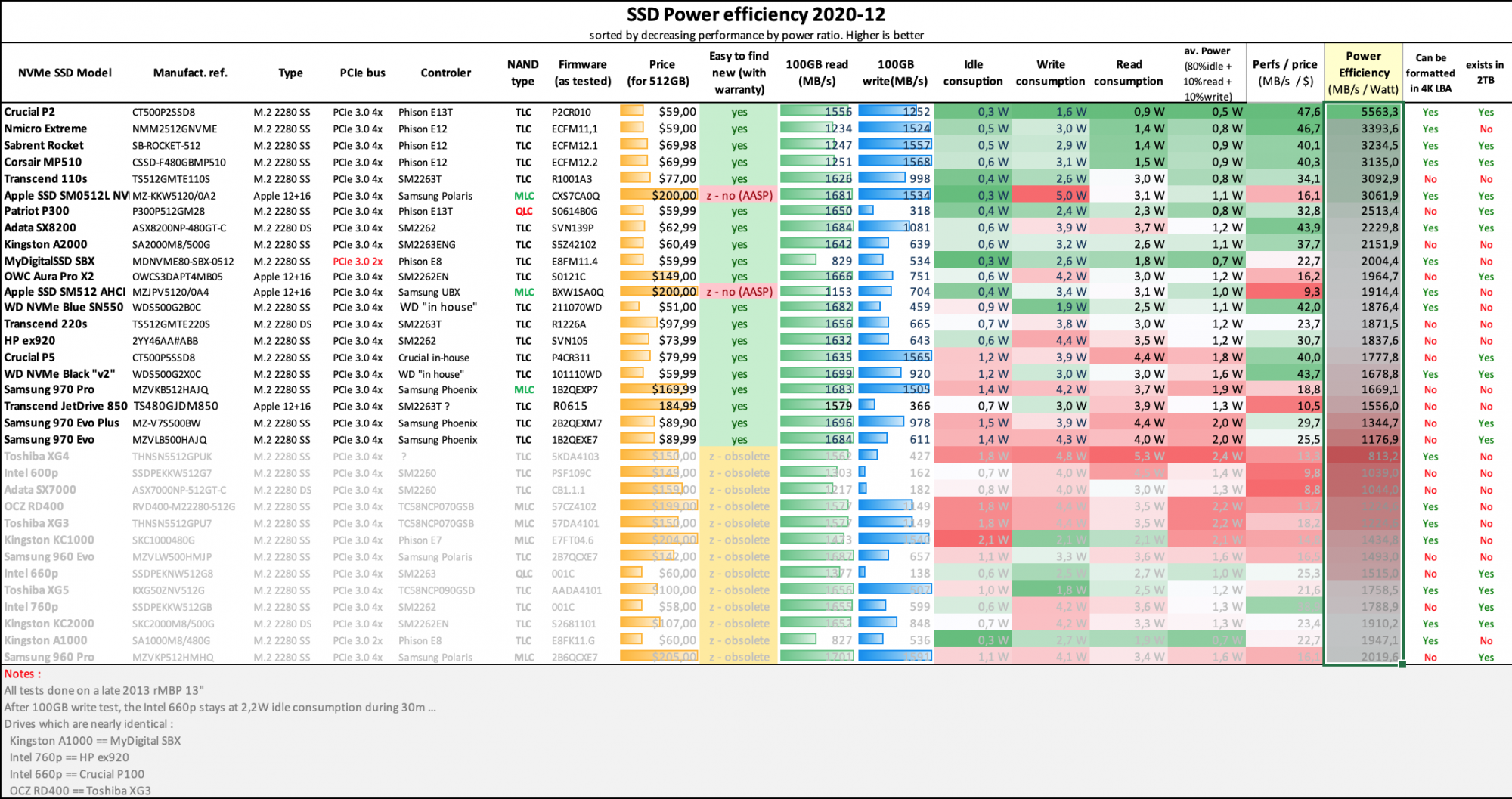 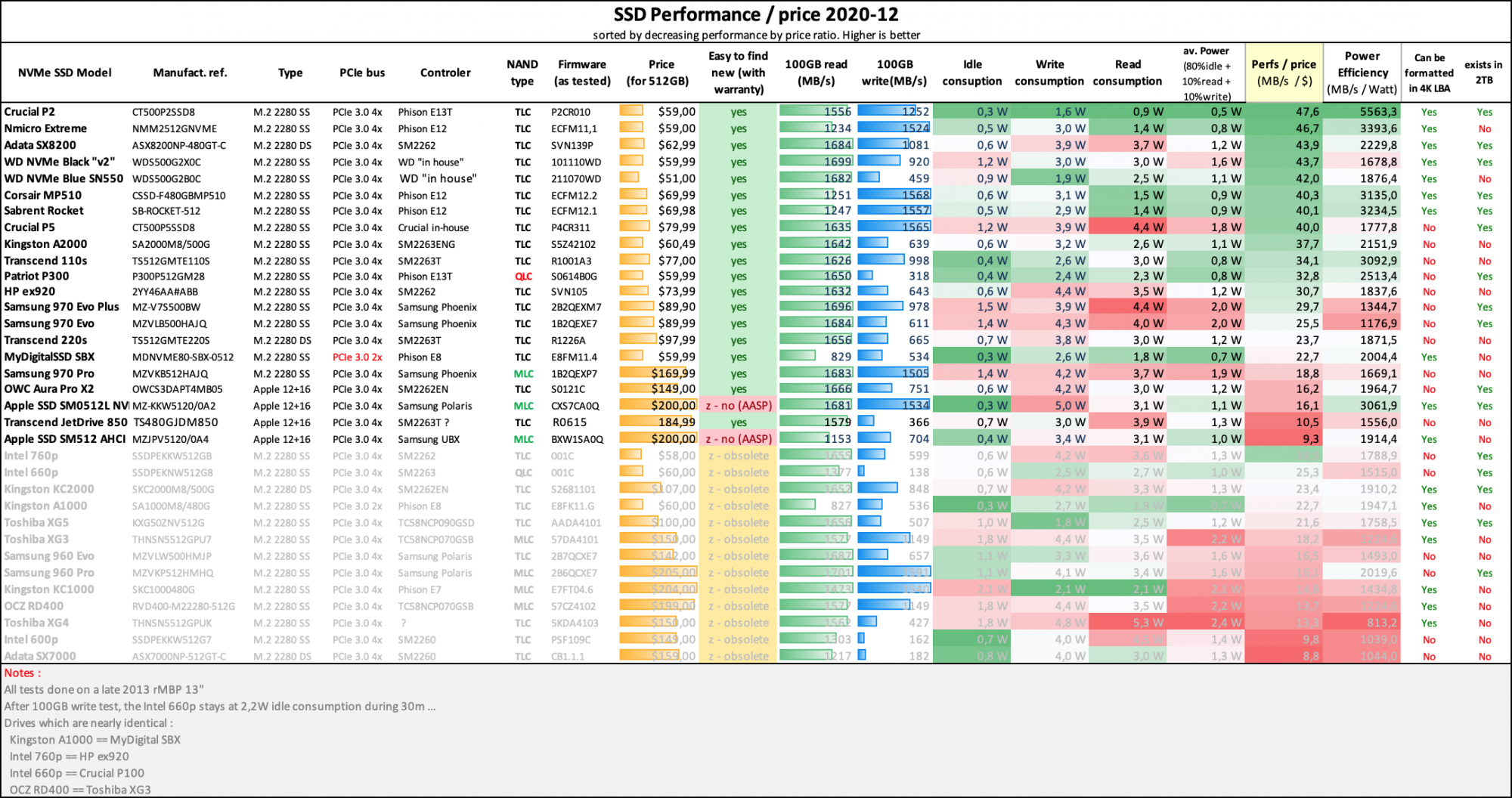 Charts are courtesy of @gilles_polysoft

Behind the scenes of this topic:

It is not critical at all, its just ~10-15 degree difference in action that will trigger fans more often
All subsequent I mean size of this behavior mostly connected with your daily usage